One of the things I like most about the culture around cigar smoking is that there’s such a variety to enjoy, and that there’s so many nuances to enjoy it that can affect the final smoke.  The first time I had Padron Anniversary Series, was tickled most by the fact that this was my very first cigar with a serial number.   I’ve since had the honor of smoking other Anniversary Series and having the opportunity to use a variety of cutters to explore other ways the flavors draw through the cigar. But this first time, I relished that this was a beautiful box-pressed cigar (and I have come to realize that I prefer a classic box pressed stick) with an elegant but simple design to the cigar ring. 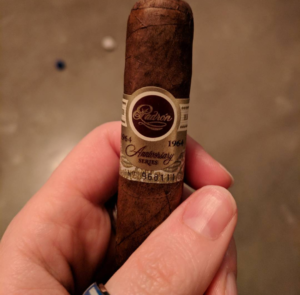 As this was gifted to me, I can’t tell you about the establishment that sold it, but I can tell you that the other times I’ve smoked this label it has been consistently great.  For this go, I had a glass of vodka (Tito’s is usually my house brand) on the rocks and I enjoyed this on the patio of my apartment.

Generally, I think smoking within the scope of abodes is just a more natural setting to enjoy a cigar.  I don’t mean within the house, but having a stick with a group of friends or on my own within the security of someplace private just seems to have a better chance of actually relaxing me.  And that’s part of what having a cigar is about– relishing that moment, not rushing it. Enjoying and savoring the time it takes to smoke a cigar.   While I obviously don’t mind having my sticks within the lounge scene,  I feel that having a moment privately just makes the whole experience better. 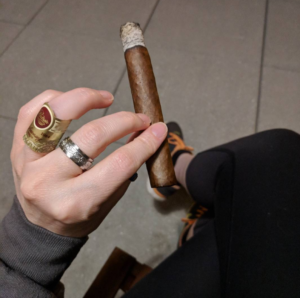 The cigar is great with a straight cut or a v-cut. I haven’t tried it with a punch,  but I suspect it’ll still be great.  It’s got a mellow leathery smell before it’s lit, and after it’s lit, there’s notes of coffee and notes of vanilla.    At the mid-point, the vanilla turned more cocoa, and the finish of the cigar had a nice hint of pepper and nuttiness to it.   In fact, I’d say that the complexities of this cigar are hard to describe, as the strength of the varied flavors changes as the cigar is smoked.  The leathery aroma was prevalent more at the beginning and the end, but diminished in the middle of the stick.   To me, the cocoa notes only showed up in the middle.  The coffee was throughout the stick, but stronger at the end and the beginning. The tiny hint of vanilla only seemed to be at the beginning, but I feel like that was mostly in the smoke from the cigar’s wrapper. The draw was smooth, and allowed for the creation of  a nice foot on the cigar.   This is a cigar I have enjoyed several times and look forward to enjoying several more times.