So one time, at King Corona, I was perusing the humidor wanting something more woodsy and peppery.  The associate pointed me to the Asylum 13, and then directed my attention to the Medulla and the Oblongata.  These are the same cigar, but the Medulla is round while the Oblongata is box pressed.  While I usually favor the box pressed cigar, I decided to give the round version of this blend a try instead.   As I have already confessed I like the pepperiness of the Asylum 13 in general, my curiosity was piqued to see the difference between the  13 and the Medulla.

The cigar comes with a nice bit of tissue paper wrapping, and you can smell a distinct cedar aroma through the paper.  Unwrapped and unlit, the pepper and the cedar are more evident.  The wrapper on this is a bit more veined than the usual Asylum 13, which is a nice touch. 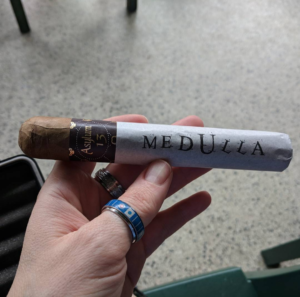 I smoked this with my usual house Merlot at King Corona.  A small personal aside– while a wine bar with friends, I overheard the sommelier explain that Merlot had still lost some popularity because of the movie Sideways.  Folks, that movie was 14 years ago. Merlot is amazing. Don’t let one cranky scene in a movie dictate you away from a delicious vino– if you choose to try it and not like it, that’s okay.  Side rant over, this cigar was very nice with the dry Merlot and would probably work well with a good whiskey, bourbon, and for a non-alcoholic twist, a nice root beer.

It starts off heavy on the cedar, but it doesn’t feel like I’m smoking the tree because that peppery aroma that I like form this line is still quite evident.  At the midpoint of this cigar, there was actually even a soft fruity undertone, like a persimmon.  It wasn’t very obvious, it was subtle but it did take the intensity off the cedar flavor and and made the pepperiness brighter.

The draw is very easy,  and keeping a foot together was a little more difficult than usual for me. Your mileage may vary, but I did find that I had to ash this rather frequently, and I suspect the loose draw might have been at play with that.  I have not yet tried the box-pressed Oblongata, but I’d be willing to bet that this ashing situation would not be as prevalent on that cigar.   Either way, the smoke was invigoratingly peppery, with enough cedar to be a little differing for me.  A good smoke for a relaxing time outside.

It was an odd rainy day that kept the power flickering in Ybor City, one of Tampa’s historic districts.  I’d met a friend for lunch at Hamburger Mary’s Pub, and we wandered down to King Corona Cigars after. King Corona is a Tampa icon– it’s directly on the ‘main strip’ of Ybor, and I would recommend them as a stopping point for any cigar aficionado.  The building is ancient and decorated as such, but the staff at King Corona are passionate about their work– both for their humidor and on the cafe side.

In other trips, I have savored their Cuban coffee with my selection of stick, but this go around, a power outage had struck King Corona   The stalwart staff of the humidor and cafe weren’t daunted by a lack of electricity, they just asked for cash only and explained that the espresso and cappuccino machines were down.  In answer to my, “Y’all still have wine, right?” was a glass of house Merlot, generously poured and a glass of water with what ice cubes they had left. 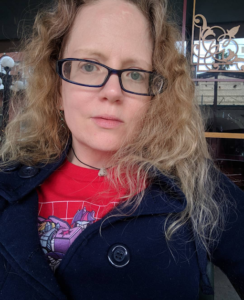 I’ve been to King Corona with enough frequency that the humidor associates usually have no trouble recommending a cigar to me.  And I can certainly say that while they may not have the largest or most diverse humidor in the Tampa area, I have never had a disappointing cigar selected for me. But the odd weather put me in the mood to have one of the cigars I consider one of my staples, an Asylum 13.

The Asylum line in general is quite good, but the 13 has that really simple but eye catching ring and the perfect amount of pepperiness that I love so much.  On a strangely cool rainy day, the Asylum smoked like an old friend. The draw is smooth and easy, and the cigar starts with a dark brew coffee aroma and ends with that gorgeous dark pepper finish that I love so much. My friend and I sat and people watched as we savored our cigars and our beverages, with the King Corona staff attentive and mindful of our drinks and bringing us another cigar ashtray, even as they were working on getting the power restored. A fine way to spend a Sunday.