With the infused cigars by CAO, there’s a few that I consider “go to” in that line.  And in the fall, the Solfyre is a delightful smoke.   I tend to enjoy this in the petite Corona size over the cigarillo size, as the wrapper for this particular cigar is nicely infused with whiskey and the cinnamon is a pleasant warming nuance and not a huge slap in the face like some of the alcoholic equivalents to this stick.  The petite Corona makes for a nice after dinner smoke that doesn’t take terribly long and also isn’t something that seems over too quickly.  Also, the petite Corona has something the cigarillo version does not: the fancy sleeve. 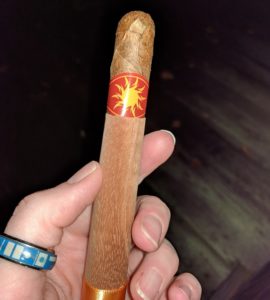 After taking the sleeve off, it’s the Cameroon wrapper shows nice color and good veins of a quality leaf.   The cigar ring is still a nice golden sun on a red band, very simple but also very easy to recognize. The stick smells of cinnamon and whiskey before it is lit, with a slight sweetness.  This cigar is not as saccharine as a Fireball whiskey, this is a complimenting sweetness to the cinnamon’s heat.

After it’s lit, the flavors of the whiskey infused tobacco take lead, with the cinnamon coming through more in the smoke.  The draw on the petite Corona is very nice, smooth without being too easy.  Developing a foot on this is a pleasure.  At the midpoint, the cigar still had predominantly the whiskey infused tobacco tastes, but the cinnamon is now also in the mix on the tongue and not just in the air.  The wrapper is sweet while smoking, and it’s just a lovely relaxing cigar for the upcoming fall weather.

The cigar finishes with that same whiskey infused tobacco tastiness, but I get a bit of nuttiness at the finish of the stick.  The smoke from this one also lingers, so it’s like a cigar version of a cinnamon broom– not quite as assaulting on the senses from 3 feet away, but a reminder of holiday smells and flavors.   For this particular evening, I had this with a spiked sparkling water, but I’ve successfully this stick in the past with coffee, Irish coffee, hot tea, Merlot, Cabernet, bourbon, whiskey, and vodka.  I don’t think it would go too well with root beer or any heavily flavored beers, but I think it would be fine with a coffee stout. or a lighter ale. It might go well with some of the seasonal pumpkin ales and beers, as those tend to have cinnamon in them.