Again diving into that 90+ rated cigar collection from Thompson Cigars, and when I was selecting this smoke, I was growing weary of the lighter cigars and picked out the darkest one in the bunch. I wanted a proper cigar for my Sunday smoke.  The stick that earned that honor was the Casa Fernandez Miami Reserve and earned it with class and distinction.

When I picked out this cigar, I should have really thought about how many lighter cigars I’d been smoking as of late.  But this one smells amazing– There’s a few cigar shops in Ybor that have the most delightful older men lounging in them in the afternoon, that were willing to help a young me pick out cigars for my bother-in-law and eventually for myself. They would serve me an espresso or a Cuban coffee and talk to me about where each part of the cigar came form and why it was an art.  This cigar smells just like those cigar shops– notes of coffee, notes of leather from the chairs and couches, and a very dark and oily tobacco smell. 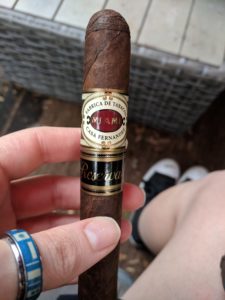 Once lit, the flavors just got stronger.  This cigar looks like a mid weight, but it’s a heavy hitter.  The dark tobacco and the roasted coffee aromas just kept getting deeper and darker.  The draw was smooth but not easy, while I was able to make a good foot on this stick, it did need some pretty frequent relighting. 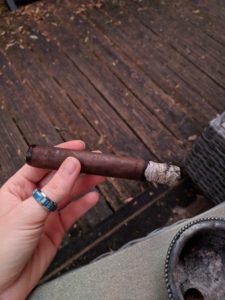 I’ll be blunt– this cigar knocked me off my ass. It’s very dark, very rich, very good, but very strong–  I had to smoke it slower than I had been smoking other things and it went straight to my head.  Their site advises having this cigar after a full meal and I am in no place to disagree with that statement.   And had eaten that evening– a delicious burger, bacon and sweet potato tots, plenty a full meal!  I might have been a shade dehydrated though, so I did stick with the sparkling water as my beverage.  I would try this cigar again when I can really spend a few hours to smoke it, and possibly with a red wine, and definitely after a full meal.