After mentioning that I had the Hyde and the Jekyll together in my last post, I felt bummed that I had no evidence of Hyde to share.  Then a trip to Cigar Cave in Palm Harbor happened.   I hadn’t been to this lounge in over two years, so I am happy to report that it was an amazing trip.  Cigar Cave had been pretty great the first time around, but they’ve put in new (new to me, I’m sure it’s been around a while) seating that looks swanky and was really comfortable, and the humidor looks to be a little better organized.  The area feels more open than the time I had been there before.  I walked into the humidor wondering about the Pudgy Monsters and when one of the staff asked me if I needed help, I asked about them.  He said that they didn’t have any Pudgy Monsters and he wasn’t sure if they’d get any boxes, but he did have some Skinny Monsters– and this was good enough news for me!

The associate led me out of the walk in humidor and took me over to a special case closer to the bar, where he had a healthy number of Skinny Monster Hydes and Jekylls.  I strongly recommend both of these for your enjoyment.  I then went to see Nicky at the bar, and she poured me an amazing Cabernet Sauvignon and I went to go sit in that cushy chair in the corner to enjoy my lovely Skinny Hyde.

Unlit, this cigar has undertones of the pepper that I get much more strongly in the Jekyll.  From the Hyde, I get much more wood notes before it was lit, especially some cedar.  When it’s lit, the pepper comes through with the wood aromas, almost like a spicy oak with some nuances of leather.   At the mid-point, I felt like the oak flavors had taken the place of the cedar, and there was some other spiciness working with the pepper. It seemed more like a subtle melange of spices than just straight up pepperiness. 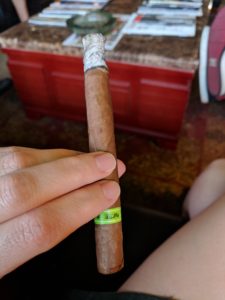 The draw on the cigar is very easy, making it a smoke that goes a little faster than I would usually want but it is a Skinny Monster, so that is to be expected. It makes for a great foot, and I also found it worked well with the cab sauv, having a second glass to finish off the cigar. Nicky is very generous with the wine pours, and her suggestions on other imbibements were spot on.  The end of the stick actually had some notes of vanilla, cedar, leather and the pepper was much stronger here.  While the Jekyll was a pow-to-the-kisser peppery all the way through (which I love), the Hyde has really interesting layers to it’s aromas.  Just not quite the same eye opening punch as it’s partner stick,  but still a good cigar.