During a supply run for the potential tropical depressions that might develop into named hurricanes, it is tradition to stock up on libations.  So I found myself in the humidor at Total Wine and looking for something fun to smoke.   While I picked up a few sticks that are tried and true, I recalled how interesting the H. Upmann by AJ Fernandez had been for it’s creaminess, so I decided to try something by the same label, the Banker by H. Upmann. 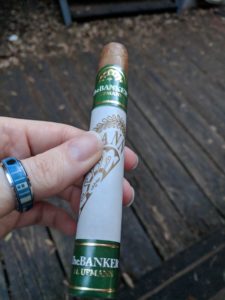 This has a combination of things that I found interesting– the ring is huge but not that gaudy, as it’s being used to hold up a nice piece of parchment.   It’s tastefully rendered in green and gold that are colors usually associated with financiers.  It’s also a square roll, which is not my favorite box pressed but it is something that is unique to run into.

After unwrapping the parchment from this cigar, the understated creaminess that I got from the AJ Fernandez was a compliment to the lead flavors.  Unlit, the bigger aromas were leather, coffee, and spice.

After lighting, this really opened up the flavors of leather, and spice–  I got a nutmeg out of this on the first part of the cigar, and that nuanced creaminess helped balance everything out.  This didn’t make this a sweet cigar, this was more like a sense on the back of the tongue that indicated that was the final flavor of the inhale.  The smoke lingers languidly, and smells of leather and coffee with tobacco. 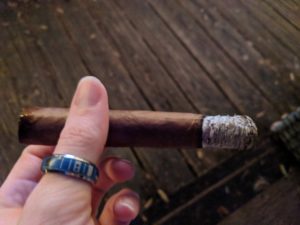 The draw is smooth without being too easy, and it made a decent foot that didn’t feel like it was going to fall off the cigar without warning.  At the midpoint, the cigar was still quite predominantly leather in flavor, but the coffee had faded and the nuttiness and nutmeg developed quite pleasantly.   Towards the end of this cigar, it had a dryness that reminded me of a red wine, and I decided to throw in a square of chocolate into my experience. 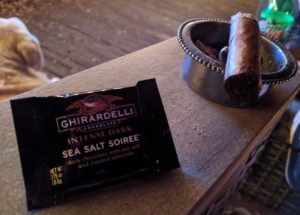 Like so many other things, I like chocolate to be dark.  I also rather enjoy my sweets to be a bit on the salty side, so I love the sea salt addition.  This paired well with the cigar and the sparkling water I was drinking at this stage.  The ending notes of this cigar are more coffee than leather, with a tinge of nutmeg and that almost elusive creaminess that really helps this stick bloom.   As far as I’m concerned, this is another winner for a good medium body evening smoke with friends.  It would go well with coffee, liquor of any choosing, and any soft drink that I can think of.