As I posted in the Alpha Infused post, I picked this up at the Heights Cigar Shop. They had several varieties of the Absinthe infused cigars, and I wanted to know the differences.  This is the Alpha Infused edition New Orleans,  which is a smaller half corona style, and popular enough that I took the last two in stock.  While there isn’t a ring on these, I do love the label on the inside of the cigar box.

I decided to light this up at a picnic among friends this past weekend. By some wonderful miracle, it was a gorgeous afternoon that did not rain during the time we all were eating and mingling.  It was lovely to have a pop-up tent, a steady breeze, a comfy camp chair, some grilled eats, the great company of some fantastic people, and a tasty cigar. 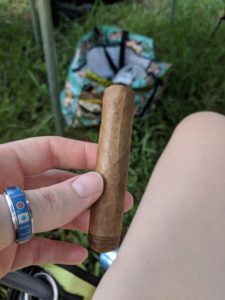 While this particular version of the Alpha Infused is smaller, it’s certainly not short on flavor.  And honestly, it doesn’t look interesting as it’s sold only in a cellophane wrapper with no ring, no indication of what potential it has. Much like the larger cigar, this had a beautiful aroma before lighting.  A bit more floral in notes than the larger version, and spicy.  The New Orleans edition doesn’t have quite the amount of creaminess that had been in the larger cigar.   After lighting, it doesn’t ease up on the flavors.  This cigar is strong in the ways of the wormwood and absinthe spices.  Perhaps the smaller version just made the melange of flavors more compact and intense on delivery. 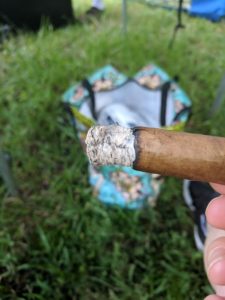 The draw is smooth and not too easy, which is good on a smaller cigar.  A foot was certainly doable, although I didn’t want to get it too long.  While in the large cigar the spiciness mellowed, that was not the case with the edition New Orleans.  This cigar does not ease up with any mellowness at all.  The spice flows along the smoke and it stays very steady through the whole of the stick– there’s a bit of the creaminess that I found fascinating in the large cigar, but it’s certainly a flavor you’d have to remember to find as it’s not very apparent.  This stick is a tiny intense smoke of deliciousness.  It will not go gentle into that night, and it was a perfect picnic smoke.