The Heights Cigar Shop and Cafe is an adorable bungalow next to the Jug & Bottle in Seminole Heights.  While the location doesn’t currently have a license to sell alcohol, they do have events for tastings and pairings of beer, wine, and liquors with their cigars. They do have some seating and a poker table, and sell soft drinks to go with your stick, and I suspect BYOB wouldn’t be a bad idea if you have a preference for something to go with your smoke.  As it was on this trip and in the past, I have found that their humidor, while small, is stocked with unique cigars that I haven’t been able to find in other brick and mortar locations.  While I had seen an absinthe infused cigar here before, this time I noticed that they had more of a selection. I picked up a few, and one of the sticks I smoked recently was the Alpha Infused Connecticut.

Before lighting, the aroma of this cigar is definitely on the complex side.  The Connecticut wrapper lends a bit of a cut grass smell, but the bulk of the leaves are Cuban seeded Piloto Cubano, which is a creamy but spicy smell.  There is only one leaf in the cigar that is infused with absinthe, and I suspect that they roll it in to be towards the top as I could definitely get the aroma of wormwood before the cigar was lit.  I also really love the Art Deco feel on the cigar ring, this might become one of my favorite bits of cigar art.

After lighting, the eleventybillion spices (okay, fine, 15 spices) that go into making absinthe really blossomed. Not entirely peppery, the spices gave a bit of a tingle on the back of my tongue that I found enjoyable and not distracting from the cigar.  The smoke itself tends to linger as the cigar is inhaled, not rising immediately up but curling around before dissipating. At the beginning of the cigar, I could get some pine and coriander.  At the midpoint, the cigar got a little creamier, but no less spicy with a stronger pine and developing a bit of a citrus taste.  Towards the end of the cigar, the flavors mellowed a bit, and the citrus and spiced aromas were like a delicious holiday beverage, they blended well and were not overwhelming the tobacco that lend to a lovely smoke. 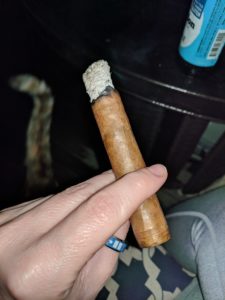 The draw was smooth, but I seemed to have trouble keeping the stick lit and also with smoking it evenly — this may be more on me than the cigar, as a) It’s monsoon season here, so humidity is basically in the 95% range and b) tiny lady lungs may have needed to just take the time to draw, but I was enjoying the flavors so much that I might have been rushing it a bit.  Nevertheless, even in my impatience, I was able to get a really nice foot going.  Ashing this was with no difficulty and there weren’t a lot of strays.   I smoked this with an IPA, but I think it would go well with a nice vodka, a sparkling water, or citrus soda.  I think any other more nuanced alcohol or beverage would ruin the complex and diverse aroma that this cigar produces. This particular cigar has gotten good reviews from others, and I can certainly see why.  I hope to find these again at the Heights Cigar Shop.

One Reply to “Alpha Absinthe Infused at Heights Cigars”