I liked the Blue Torch so much that I decided to stay for another cigar and smoke it.   I didn’t want anything too heavy as I was still feeling the Fuego Verde, so I opted to browse in the humidor they have at the bar for flavored and sweeter options.  I settled on a Sweet Jane, as my friends had gotten it earlier and it smelled quite nice.  This cigar had also been recommended to me at the Heights Cigar Shop, so I figured I was due to try it. 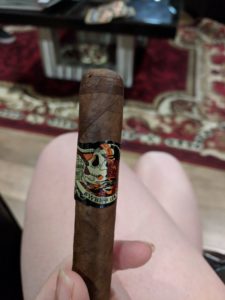 The Sweet Jane is not a flavored or infused cigar, so I’m not sure why Blue Torch had it in that humidor.  The sweetness is somehow magically eked from the tobacco leaves themselves, so it’s not a sugary smoke in any way.  The cigar ring is reminiscent of classic tattoos, and the cigar smells of chocolate and coffee aromas with the mild tobacco.   What makes this cigar work for me is that Maduro wrapper that ads that layer of darkness that I love so much.

After being lit, the coffee and chocolate nuances are stronger, and the tobacco is nice and mellow without being too light or too dark.   At the midpoint, there’s a tiny bit of a vanilla essence going on, but the stick remains mostly mocha-like with a solid tobacco flavor.  This cigar smokes comfortably smokes in about 40 minutes, and the draw is easy and smooth.  A nice foot for the size of the cigar.

This was the perfect Cigar-after-a-Cigar that I needed to round out my evening.  I had this with the Merlot, and I would think that this cigar would also go well with just about any beverage.  I might get more to have for an after work smoke as this was simply a nice easy going stick.