I had the opportunity to visit this charming but badass cigar lounge in what is downtown Dade City,  Florida–  Ronaldo’s . This a beautiful building in the area, and I was greeted at the door by one of the cigar dogs which instantly endeared me to the location.  While the humidor is small, it carried quite a few of the labels I would count on for a good smoke, as well as pipe tobacco and other smoking accessories.   While I picked up a Hex, my friend said that Roloando’s is the only brick and mortar shop where he’s found the Shock and Awe.

While we didn’t stay to smoke at this trip, I would love to in the future.  Rolando’s has dart boards, a billard table, a full bar, and did I mention cigar dogs?  The staff were super friendly and there did seem to be a fair amount of seating for the clientele.  I look forward to seeing these folks again. 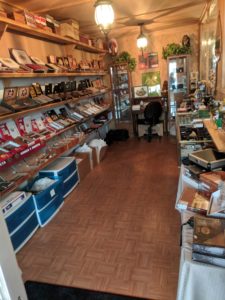 Back at my friend’s patio, the Hex was unwrapped– and I find it odd that the cigar ring was on the outside cellophane of the cigar, but that’s hardly a negative. I like to save the rings, so I cut it off later. I also liked the little nubbin on the cigar, and I felt like that could have been popped off to do a pseudo punch, but I opted for a straight cut anyway. Unlit, this cigar is a very strong leather aroma, with a bit of a nuttiness to temper that and keep it from being a little too overwhelming.

After it was lit, the beginning of this stick had leather as still quite the star of the show in terms of aroma and flavor.  The nuttiness took on a distinctive hazelnut nuance which was a nice compliment.  This was definitely a cigar made for a stronger palate than a beginner, but I would not call the Hex a full on heavyweight.  The draw was fair to easy and I was able to make an impressive foot at several points while smoking this cigar.   At the midpoint of the cigar, all of the flavors really mellowed out and the smoke got a little easier.  At the end of the cigar, there was a bit of a bitterness I couldn’t quite place, but it did not end on an unpleasant note. It was just a different end than I had expected.  While this is a good cigar, I don’t generally see myself going out of my way to find it again. 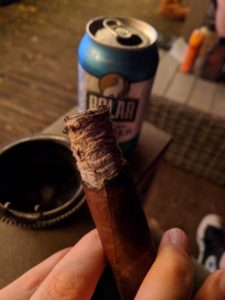