I’m going to start right off the bat and admit that the Pilon by CAO is one of my go-to cigars. Personally, I think this is a practically perfect cigar in almost every way.  CAO put in the effort to bring back a traditional fermentation method of the tobacco just for this cigar and the effort to maintain a circular Pilon pays off in an amazing stick. Bonus,  you can usually find this gem for under $7. 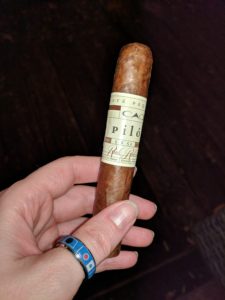 I love the cigar ring on this stick, it’s simple but still bold– which could explain everything about the Pilon in a nutshell.  Before lighting, this cigar smells of chocolate, earthiness, cedar, and cafe au lait.  Not a creamy and a coffee separated flavors, specifically cafe au lait aroma.  A steamed milk and coffee drink, not two different smells.  A tricky thing to pull off, but it’s there.

After lighting, the nuances adjust more to an earthy, chocolate, dried fruit melange of deliciousness. While I don’t feel this cigar is a sweet cigar, it only has sweet aromas and flavors that would hit the back of the tongue.   They won’t overpower the peppery or earthy aromas that are the powerhouse behind this stick.  The draw is clean without being too easy, so this stick does seem to take a bit longer to smoke than others of comparable size. 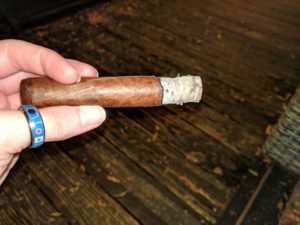 A nice foot can be built up, but it takes some time.  You won’t mind the slower smoke though, especially if you’re a fan of the earthy, peppery flavors that show up about the midpoint of the cigar.  The chocolate and dried fruit combo that started the stick slowly take a back seat to the stronger cafe au lait and earthy aromas at this point, with the pepperiness coming in just at the end of the flavor profile.   Towards the end of the cigar, the pepperiness is front and center, with a leather, coffee (no more steamed milk at this point), and cedar finish.   Having said that this cigar is one of my tried and true smokes, I hope you also give it a try.  It goes well with coffee, dry wines of both red and white varieties, vodka, whiskey, and even just a cold soda– although I wouldn’t advise any fruity soft drinks or liquors with this one.