After a long day of working, I opted to go for a lighter cigar from my humidor.  The Macanudo Café grabbed my eye for it’s slightly flashy cigar ring and it’s lighter wrapper.  This stick was part of the sampler sent by my Brother-in-Law as a 90+ rated cigar. I remember a few folks in college who liked Macanudo cigars.  This was before I started down the Path of the Leaf.  As that was a young crowd, that might explain the appeal of a lighter leaf.

Before lighting, this cigar smelled faintly of leather with some floral and honey notes.  It cut nicely, and after lighting, the aroma was definitely on the floral side, with nuances of honey and hay.  I feel my palate has gotten too accustomed to darker (and I mean generally medium body when I say darker) cigars and for the spicier notes of my preferred tobacco.  While I’m sure this is a much more appreciated cigar for those who enjoy a lighter smoke, this was really just okay in my book. It wasn’t awful, but I wouldn’t rate this as an amazing smoke, personally. 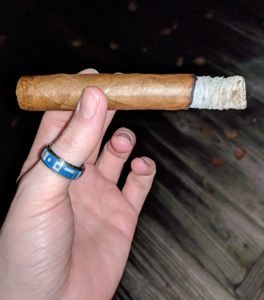 To the Macanudo credit, this cigar did smoke easy and smoothly.  I had no trouble keeping a nice foot going, in fact I took a few different pictures as I kept wondering when the ash would break. Much to my surprise, I actually made a rather impressive foot on this cigar, but hadn’t photographed it.  I don’t always trust my gracefulness (especially as there is a distinct lack of grace, but pretty decent reflexes) ash properly when a foot gets large, so I tend to probably ash too soon.

I know this is a beloved brand, and even considered a highly rated cigar. However, it’s just not for me as it’s simply too… bland. I feel like this is a cigar that is smoked to say one smokes a cigar and by folks who don’t generally really get into cigars as quality moments in life.  I didn’t get any unique flavors, I can say I wouldn’t call it awful, but there was nothing to draw me in to really examine what I was smoking. I had this with sparkling water, perhaps if I had smoked this with something more potent I would like it more.